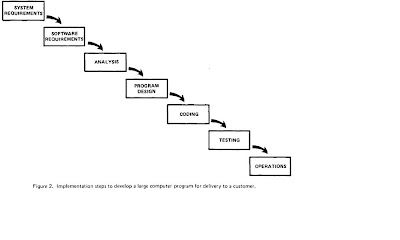 Let’s look at each stage for the process – requirements, design, coding, testing … it’s an assembly line. At each step, someone produces a work product which is handed off to the next person in the line. Only the project manager owns the entire process. In fact, some of our very own job descriptions, like developer, or tester, or requirements analyst, assume that our entire role is to perform one box in the sequence.

Later in the paper, Royce went on to write:

“I believe in the concepts, but the implementation described is risky and invites failure. The problem is illustrated in Figure 4. The testing phase which occurs at the end of the development cycle is the first event for which timing, storage, I/o transfers, and so on are experienced as distinguished from analyzed. These phenomena are not precisely analyzable. … Yet if these phenomena fail to satisfy the various external constraints, then invariably a major redesign is required. A simple … patch or redo of some isolated code will not fix these kinds of difficulties. The require design changes are likely to be so disruptive that the software requirements upon which the design is based and which provides the rationale for everything are violate. Either the requirements must be modified, or a substantial change in the design is required. In effect, the development process has returned to the origin and one can expect up to a 100-percent overrun in schedule and costs.”

Royce does not use the term “waterfall” in his original paper. His final recommendation involves writing the program twice; admitting that the first iteration will be problematic, accelerating it, and finding the deficiencies in the requirements and then starting over with design. The term probably came out of the arrows, which kind of look like a waterfall.

Yet too many people never got past page one of his paper. After all, this is familiar; it’s applying Fred Taylor to software. And Taylor’s a genius, right?

It turns out that Taylor’s entire body of work is based on experiments with Immigrant day laborers who had to move raw iron from the factory to box cars. The typical object of that work had a third grade education, which was typically in German.

Software development is not turning a wrench – it is intellectual work – knowledge work – that is different every time. When we do heavyweight handoffs, we lose information. We say “We really need to get the requirements right next time.”

Now, one definition of insanity is doing the same thing over and over again and expecting a different result. For thirty years, Process Improvement (in capital letters) has been telling us to get the requirements right up front. And we’ve been failing, for thirty years. That is insane.

Types of testers and the future – I

Isn’t it time you had a TestRetreat?

The Past Through Tomorrow