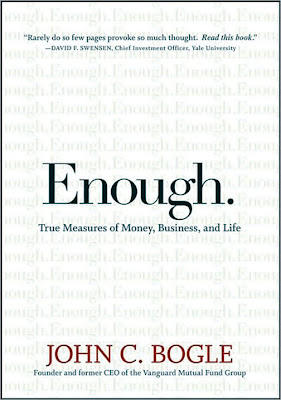 For the past several years, whenever I work with something and things go … odd … I remember it. Often I will go to a peer I respect and tell them the story, as a sort of “Gut Check.” One of the common responses I get, when I do mention names, is “Well, Matt, you have to remember, Joe is a businessman, after all.”

I have no idea what that means.

From what I can tell, it seems to mean that businesspeople are allowed to do scammy/arse-hole-ish things, because, well, their primary interest is making money, so they are going to do what it takes to make money.

Something about that doesn’t sit well with me.

Then I read the opening words to John Bogle’s new book, Enough:

At a party given by a billionaire on Shelter Island, Kurt Vonnegut informs his pal, Joseph Heller, that their host a hedge fund manager, had made more money in a single day than Catch-22 over it’s whole history. Heller responds “Yes, but I have something he will never have … enough.”

As you can probably guess, the book has a different feel than most other “business” books.

Instead of writing about Business, Bogel writes about character. One of the main thesis of his book is that the financial industry is set up with an inherent conflict of interest; that the industry is designed to benefit the consultants, lawyers, and marketers, not the clients they ostensibly serve.

This is a guy who walked around the offices of his building, leaving notes on desks, again and again, year after year, that said:

For God’s sake, let’s always keep VanGuard a place where judgment has at least a fighting chance to triumph over process.

In other words: This guy is one of us.

One of the strongest points he made in the book, the point that struck me, were the points on professionalism and serving our clients. According to Bogel, this sense of professionalism is being diminished across all aspects of society; even the traditional professions are being slowly undermined. For example, when Arthur Andersen was paid by Enron to audit it’s books, the very company that should have been blowing the whistle was actively involved in hiding fraud. Notice that, again, this was fraud by the ‘professional management’ against the shareholders of the company — the ostensible owners. (Or, as Bogle named his chapter “Too Much Salesmanship, not Enough Stewardship.”)

Of all the ways he explains professionalism in the book, I was most struck by his quote from Daedalus, the journal of the American Academy of Arts and Sciences, on it’s definition of professionalism:

1. A commitment to the interest of clients in particular, and the welfare of society in general,
2. A body of theory of special knowledge,
3. A specialized set of professional skills, practices, and performances unique to the profession,
4. The developed capacity to render judgments with integrity under conditions of ethical uncertainty,
5. An organized approach to learning from experience, both individually and collectively, and this of growing new knowledge from the context of practice.
6. The development of a professional community responsible for the oversight and monitoring and quality in both practice and professional educators

Bogle goes on to refer to these as “Eighteenth Century Values”, using Benjamin Franklin as an example — a citizen, statesman, inventor and yes, entrepreneur, someone who’s long-standing work was of lasting benefit to society. And, as much as I agree that we in testing need should improve our models and methods, I have to share a reluctant concern over our 21st century values.

I’m afraid I don’t have the energy nor the vision right now to go into the depths to review this wonderful book reminds. I hope, however, that saying the three things that follow will help:

FIRST. At the end of the book, the 82-year-old Bogle lays a top-ten list, “reasons why I battle.” One of those, number three hit me hard in heart:

“Because what I’m battling for – building our nation’s financial system anew, in order to give our citizen/investors a fair shake – is right. Mathematically right. Philosophically right. Ethically right. Call it idealism, and it’s as strong today – maybe even stronger than – it was when I wrote that idealistic Princeton thesis 57 years ago. How could an idealist fail to fight such a battle?”

We may not have the chance to have influence, or make a difference on the same scale, as John Bogle may in the financial industry, but I hope you agree that we are also engaged in a battle. And it is right. And it is noble.

I think it is worth talking about.

SECOND. Speaking of that fight, I further submit that those of us that work in testing (and in the greater field of software development) seem to be in the midst of an identity crisis. Clearly we want to be professionals; we hear constant exhortations about professionalism and appeals to “act professionally.” We have conferences and websites with names like the Software Test Professionals. Yet, all too often, our models of professionalism are cheapened into becoming about making more money, or protecting our jobs, or some soft of certification scheme.

We can do better.

THIRD. Beyond ‘testing’ books, I try to find books about testing. Last year, for example, I read The Black Swan by Nassim Nicholas Talib. So far this year, far and away, my pick is Enough by John Bogle. (If you want a second, related book that is directly about our field, consider The Clean Coder: A Code of Conduct for Professional Programmers by Robert C. Martin)

Please, consider getting a copy. It’s a quick read, and if money is an issue, I expect that you could likely get it free from you library.

Whether you can find the time to read the book or not, I will make one more request: Let’s advance the debate about professionalism in testing.

This doesn’t take much; you can do it over lunch with some colleagues, at dinner with you family, or at your one-on-one with the boss.

Let’s talk about words we don’t hear much these days: Value. Responsibility. Duty.

We may not change the world … but isn’t it time we tried?

Creative Chaos Link of the Day

The Tri-Cities in Washington State

Awards – an Interview of Matt – and lots more!