Fifteen years ago I was a cadet in the Civil Air Patrol – this picture was taken at the Middle East Region Cadet Competition in 1995 (click for full-size): 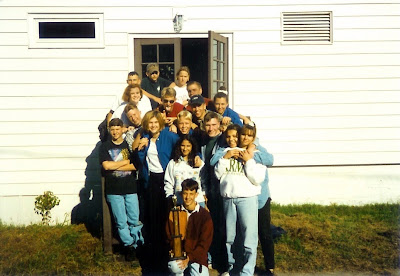 This one was taken about two years ago, in my back yard:

Can you believe I’ve had the same haircut for fifteen years?

Serious this time: The modern age is tearing apart families and relationships. During the great depression, when you lost your house, you’d move across town and move back in with Mom&Dad, or Sis, or Old Aunt Ruth. The Modern Era tore apart all that – we’ve moved for jobs, moved for college, moved to the place of the country (or planet) we like the most, moved and moved and moved and moved. Relationships broke down; five years after high school, I had contact with zero – ZERO – people I went to high school with, and family was sporadic and occasional calls and emails. Now you can’t move in with Aunt Ruth because she is a stranger that lives 2,000 miles away. You’re stuck with no job and a mortgage you can’t afford.

Yet we suddenly have email, yahoo groups, facebook and myspace. I’m more in touch now with some high school folks than was when I was in high school.

What I’m wondering is – can we use these new social media tools – facebook, (cough) myspace, twitter, instant messanger and so on – to pull together in the way that families did in the 1930’s? And what would that look like, exactly?

In the mean time, I made a post to the forums on Spaatz.org, which got me in touch with Alisha ‘Copesetic’ Christian(*), which ended up with pictures from … 1995.

–heusser
(*) -it was a funnier joke when her last name was Cope, I know.

My position on Tech Debt – I

Be Careful what you wish for …

A Better Thing To Vote For!

A couple of articles, coming at you