“If in your working hours you make the work your end, you will presently find yourself all unawares inside the only circle in your profession that really matters. You will be one of the sound craftsmen, and other sound craftsmen will know it. This group of craftsmen will by no means coincide with the Inner Ring or the Important People or the People in the Know. It will not shape that professional policy or work up that professional influence which fights for the profession as a whole against the public: nor will it lead to those periodic scandals and crises which the Inner Ring produces. But it will do those things which that profession exists to do and will in the long run be responsible for all the respect which that profession in fact enjoys and which the speeches and advertisements cannot maintain.” – C.S. Lewis, The Inner Ring

On Friday, April 17th, the software world lost one of its most sound craftsmen.

To my knowledge, he never gave a conference talk in this century. The only paper I know of that in the 21st century was in 2003, on readable-writeable webpages, based on research he did while he worked at Xerox PARC.

Yes, Xerox PARC, the place that created ethernet, the mouse, the windowed operating system and where a young Eric Schmidt learned to manage. It was at PARC that Ken Pier got his start, working on the system design and processor for the Xerox Dorado, the successor to the Xerox Alto, the world’s first recognizable personal computer, with integrated terminal and keyboard. After that Ken spent the next twenty-five years quietly commercializing the ideas that the researchers had prototyped. I once asked Ken how he survived without a PhD at PARC, and he replied with something like “All you have to do is be useful. Make things happen. There is always plenty of work moving from theory to practice.”

Finally Ken wrote that paper on editable webpages and moved on to Socialtext, developing the world’s first commercial wiki. It was at Socialtext that I met Ken, and spent the next three years of my life working for him. Michael Larsen’s experience working with Ken was very similar to mine – here was a boss with high standards, who valued the doing of the work more than any temporary political advantage. I might take that a step further and say that Ken generated political advantage through his contributions to the work. Not by hiding how to do to things – no, Ken wrote everything down. It was simply that no human on earth could keep up with him; you’d be an idiot to lay him off, no matter what he said. This was especially true in a startup fighting for survival.

At company face-to-faces, we’d sometimes spend an hour just listening to Ken tell stories. A friend of mine once used the phrase “Drop some wisdom on us”, which makes me personally uncomfortable, but not when I think back on those conversations with Ken. One evening at his house, I sat and listened until very early in the morning, then got up a few hours later and went back to work.

And, last week, we lost him in this world.

Plenty of people talk about how test lacks respect, or are treated as second-class citizens, or fill-in-problem here. I dare to say that no one ever saw a problem like that on a team that had Ken Pier at the helm. When I re-read the words of C.S. Lewis, where he says the sound craftsperson “…will do those things which that profession exists to do and will in the long run be responsible for all the respect which that profession in fact enjoys…” the first name that comes to mind in Ken Pier.

The General Motors "Culture of Quality"

What We’ve been up to At Excelon 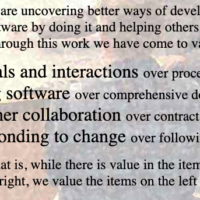 January ST&Pedia in the mail (and, ah, intarwebs)

9 comments on “Saying Goodbye to a Giant”